Why Use Carbon Fibers For The Heating of Buildings ? 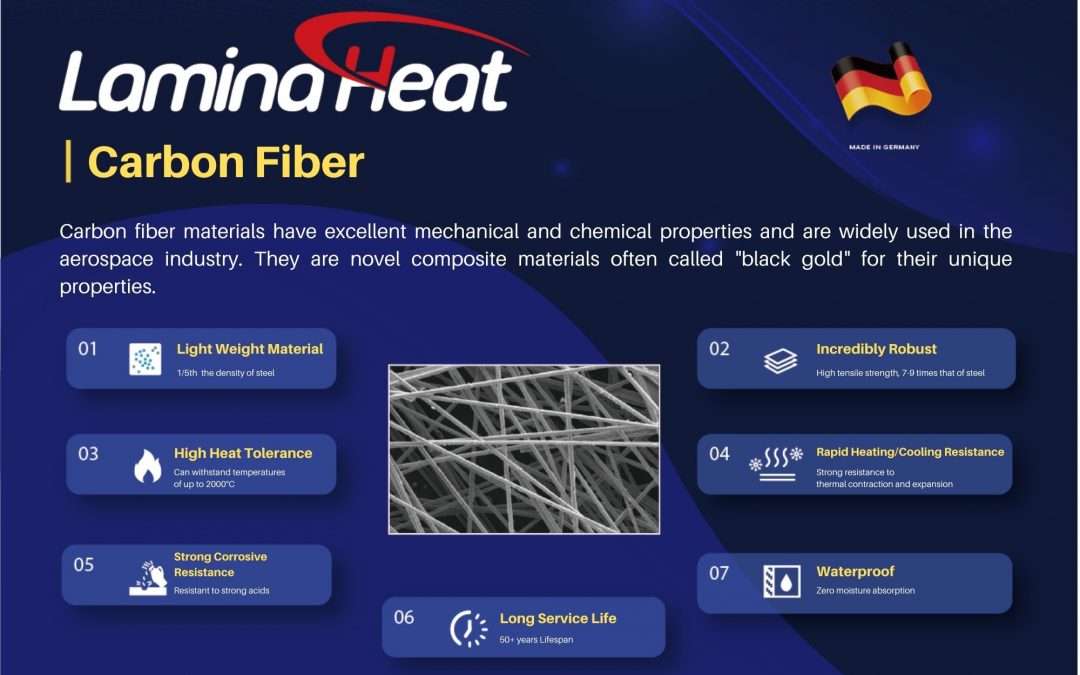 What Exactly are Carbon Fibers and Why Use Them for The Heating of Buildings?

Carbon fibers are a modern woven fiber that are made from a PAN (polyacrylonitrile) polymer.

The PAN polymer is formed into a white fibre by extruding and processing an acrylic based polymer that is used as the feedstock (precursor) for production of PAN based carbon fibers. The PAN fiber is then processed through a series of heat treatment furnaces including steps such as Oxidization(200-300°C), Carbonization(1000-2000°C) and Graphitization(2000-3000°) as well as specific surface treatments in order to produce the carbon fibre.

Once produced the Carbon Fibre can then be processed into many different raw material product types such as: woven fabrics, veils, unidirectional tapes, chopped fibres, and prepregs for use in a wide range of industries ranging from Aerospace, Automotive, Wearables, and the heating of homes!

What allows for such a high diversity of applications for Carbon Fibers? Well it’s all down to their physical and chemical characteristics!

Carbon Fibers are Strong and Lightweight

First of all, Carbon fibers are extremely lightweight, with High Specific Tensile stiffness and strength.

Carbon fibers are also 5 times lighter than steel, making it uniquely suited for applications wherein a combination of low weight and high robustness are required, such as certain structural components of rockets and airplanes. This feature of Carbon Fibers also allows us to produce a heating film only 0,3-.5mm thick(while still being able to boast a strong structural integrity) making it easy to integrate into building materials without sacrificing its robustness. Carbon Fibers great weight/strength ratio also allows for much lower masses of material to be used, which in the case of heating means a much faster heating and cooling down time.

Carbon fiber is a semi conductor of electricity when compared to metals but still has very good thermal conductive properties, with it’s

The lower resistivity(comparatively to metals) allows the fibre  to operate as  a resistive heater,and in the process convert electrical energy into heat energy.

Thomas Eddison realized this with his electric lightbulb in 1880 wherein his resistive wires consisted of a cotton based carbonized filament which allowed for less power to be used to create light energy.

Even with repeated expansions and contractions(for example when heating) they experience virtually no impact on their lifespans.

Why? Well Carbon Fibers high specific tensile and compression strength allow them to avoid possible high thermal stresses due to repeated expansion and contraction during heating cycles. On the other hand carbon fibre has a low thermal expansion coefficient, normal to fibre direction, meaning that per unit increase of temperature the corresponding expansion of the material is relatively low. However, this can vary depending on the angle of the fibre relative to the expansion axis. One advantage of random fiber construction ,typically used by our heating films, is its ability to tailor the CTE (Coefficient of Thermal Expansion) of the carbon fibers to match the underlying materials to be heated allowing us to guarantee a proper heating effect.

This is very important when considering heating in the building industry, because this means that a product such as our Carbon Fiber Heating Film won’t deteriorate over its lifespan and instead will continue generating the required heat even twenty years later just as if it was just installed. We found this out through a third party longevity test which showed that after a simulated twenty years our heating films tensile strength actually increased, meaning that our film became more robust with time(feel free to reach out if you want to take a look at the report)!

Carbon fibers are also insensitive to fatigue and can survive millions of tensile/bending cycles.

Carbon fiber composites have a benign behaviour in fatigue or lifespan when compared to metals, with a fatigue strength of around 80% of the static strength in tension, compared to steel which has below 50% .

You can’t say that Carbon Fibers don’t have a fatigue limit, however their fatigue strength for a given number of cycles and loading is a lot better than any metal especially if you account for the materials density.

The fact that it’s long term performance levels are up to 80% of ultimate stress levels also ties into Carbon Fibers unique longevity.

A typical application for Carbon Fibers is as a reinforcement in concrete. Carbon Fibers are cost effective and sustainable, making them ideal for strengthening any concrete structure. Carbon Fibers can also strengthen existing structures allowing for a more cost-effective solution than demolishing the whole structure and rebuilding from scratch.

As another example: Carbon Fibers can also increase the load-carrying capacity of bridges and other structures. Carbon Fibers also solve concretes flexibility problem, with the flexural strength of concrete doubling when Carbon Fibre is added.

Other applications include, but are not limited to:

Carbon Fibers are Easily Integrated into a Wide Range of Materials

In the modern building industry most materials often get perforated and combined with other materials using a wide range of adhesives. The unique structure of the random carbon fibers in our Carbon Fiber heating films make them insensitive to damage, which means they can be perforated without any detrimental effect on their functional properties. Carbon fibers are also chemically inert and are virtually unaffected by a wide range of chemical reagents.

These advantages enable the film to be laminated and/or embedded into parent materials such as plaster,plastics,adhesives,and/or polymeric coatings, without running the risk of long term damage occurring to the film. This allows us to apply our film almost anywhere, worryfree!

Carbon Fibers are classified as non combustible and have no listed flash point. If Carbon Fibers are exposed to high heat in the presence of fuel burning, it can eventually oxidize but as soon as the flame and fuel are removed the flame does not continue, leading to Carbon Fibers having a high fire resistance.

Carbon fibers are also not hygroscopic(meaning they tend to resist absorption of water) and are not affected by corrosion (meaning they won’t rust) so they are highly suitable for bathroom and wet area applications. Carbon Fibers can also be submerged for long period due to their corrosive resistance.

Lastly, since Carbon Fibers on the basic level are composed of well, carbon they also offer unique long term sustainable opportunities. Whether that be through sourcing of organic carbon sources through algae cultivation or carbon fiber recycling powered by renewable energy sources.

All in all, Carbon Fibers truly have a tremendous amount of value add to a wide range of industries and serve as the core component behind our full surface heating films, allowing us to deliver a one of a kind heating product!