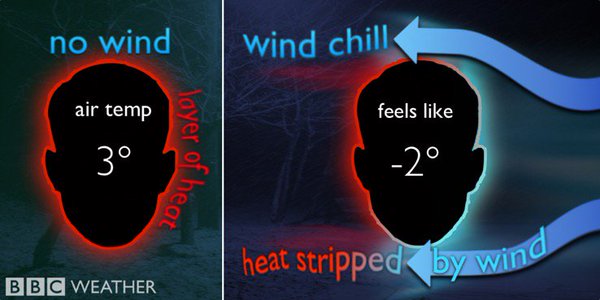 Understanding Air Speed and Its Influence on The Human Body

In this post of our Human Comfort/Thermoneutrality series we will be focusing on air speed, defining it, and explaining its relationship with our bodies.

How is Air Speed Defined?

Air speed is defined using m/s (meters per second) or FPM (feet per minute) in the metric and imperial systems respectively. These units indicate the speed that the air is traveling per unit of time and serves as a useful reference point for accurate project design/modeling. Indoor air speeds generally range from 0m/s all the way to 1.5m/s. Whereas outdoor air speeds can be multiple times that.

Faster Air=Faster Heat Loss (most of the time)

As we now know from our thermoneutrality series , the human body is an endotherm meaning it is simultaneously generating heat while also needing to maintain a very specific internal temperature. This leads to the body’s need to conserve heat in cold environments and expel heat in warmer environments.

In environments where the air temperature is colder than that of our bodies (37C+/-) the air is actively absorbing heat from our skin through convection and conduction. In contrast when the air temperature exceeds 37C air is actively adding heating to our bodies. This heat loss/gain can either have a positive or negative influence depending on the situation. When heat loss starts to exceed our bodies ability to generate heat we start feeling cold, and if this trend continues for a prolonged period of time and our body’s core temperature drops below 36-35 we run the risk of experiencing hypothermia. On the flip side when heat gain exceeds our ability to expel it we run the risk of our core temperature overheating (39C+) and in turn causing severe health complications or death.

So how does air speed influence our perception of feeling cold or hot?

Air speed essentially acts as a heat flow multiplier, increasing the rate of heat exchange between our bodies and the surroundings. This can take three distinct forms depending on the state of the environment wherein we find ourselves.

Windchill is a term referring to our increased perception of feeling cold when the air speed and temperature pass a certain point. However, to better understand it one must first know that when there is no to little air movement(0-.2m/s) the air in our immediate surroundings tends to be a higher temperature then air further away (in both hot and cold environments) due to the air having absorbed a portion of our bodies excess heat. Now eventually the air in our immediate surroundings moves away and “fresh” colder air comes in absorbing a relatively greater amount of heat from us than the previous warmer air(due to an increased temperature gradient).

Now when air speed increases, this heat transfer process speeds up. The warm air in our immediate surroundings gets replaced by colder air at a faster rate, in turn absorbing a greater amount of heat from us. This then gives us the sensation of it feeling colder than the air temperature indicates. This sensation is what we commonly refer to as wind chill. 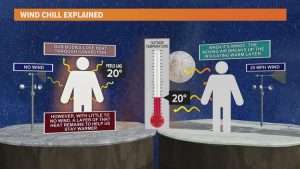 Windchill increases the perception of coldness.

An interesting thing to note here is that wind chill in cold environments doesn’t actually mean the air temperature is lower, in fact the air temperature is still exactly the same (this can be seen by water not freezing even when the windchill temperature indicates it is below 0C or 32F!), but, instead windchill simply increases the rate that our body is losing heat in turn giving us the feeling that it is colder than it actually is, since cold is actually just the perception of lack of warmth!

What about in warmer environments?

When the air temperature sits below 36C or 97F the air is still actively absorbing heat from our bodies. However, when the air temperature exceeds 28-30C our bodies must take additional actions to expel the heat we are generating. This is due to the fact that the proportion of heat expelled via convection/conduction decreases with increasing air temperature. These additional actions are required since heat naturally flows along a gradient and as the gradient (in this case temperature) decreases the total amount of heat flow also correspondingly decreases. In warm environments, our bodies react by  vasodilating our blood vessels decreasing the distance between them and our skin and thus facilitating heat transfer. Additionally, our bodies also start to sweat. The sweat we secrete absorbs heat from our bodies and evaporates, in turn helping to expel excess heat. In this process humidity also plays a significant role but we will save that for a future blog post on humidity.

What happens when air speed increases?

Similarly to a cold environment, in this scenario the greater the air speed the greater the amount of heat loss that occurs, only in this case it is a positive. By constantly replacing the air surrounding our bodies the rate of heat loss through convection/conduction to the air is increased in turn allowing us to feel more comfortable. This is why in warmer environments increased air speed is often seen as a positive and feels quite comfortable. Practical examples of this can be having a fan blowing on you or having the windows in your car rolled down in summer time.

But what if the air temperature continues to rise?

When the air temperature exceeds that of our bodies core temperature (37C), increased air speed has a negative influence and can lead to an incredibly uncomfortable environment at best and death at worst.

This is due to the fact that when the air temperature exceeds 37C it is no longer capable of absorbing heat from our bodies instead, providing itself the heat needed by our sweat to evaporate! This means that our sweat not only loses some of its effectiveness, but our bodies also start to dehydrate rapidly. Increasing air speed in this situation only serves to increase the speed of dehydration. This is the reason why, when air temperatures exceed 37C/99F using mechanical fans does nothing to alleviate discomfort and instead serves as a serious health risk.

So in conclusion, we now know that air speed serves as a multiplicative factor for heat exchange when it comes to our bodies.

In warm environments high air speeds/velocities also increase heat loss, but serve as a net positive by helping our bodies expel excess heat that it would otherwise struggle to expel.

Lastly, in very hot climates high velocity hot air serves as a major health concern by reducing our bodies ability to expel heat via sweating/evaporation and increasing our core temperature!

In our next blog post we will go on to analyze how air speed influences indoor built environments and how this can help you in make more informed design decisions!